An estimated 5 million individuals globally are thought to suffer from Lupus (known as Systemic Lupus Erythematosus or SLE) a chronic, life-threatening autoimmune, inflammatory disease with a pattern of flares and remission. Lupus can affect multiple organs such as skin, joints, kidneys, blood cells, brain, heart and lungs. It can appear in a multitude of forms, making diagnosis difficult with patients presenting to several different specialists (mainly dermatologists, rheumatologists and nephrologists). Awareness of the disease has steadily increased in recent years and should continue to do so due to well-organised patient groups and increased research and development activity into new treatments. New detection tools are now in place and are increasingly used by physicians, which coupled with greater recognition, should lead to an increase in diagnosis rates.

Lupus is a chronic inflammatory disease which is thought to affect some 5 million individuals worldwide. The current standard of care still consists of drugs which have many side-effects and limited efficacy. Despite the need for an effective treatment, only one new therapy, namely GlaxoSmithKline’s Benlysta, has been approved to treat the condition over the past 50 years. As such, there clearly exists an unmet medical need for a drug that has a strong efficacy and safety profile.

Lupuzor™ was successfully licensed to Cephalon Inc., in February 2009, in which ImmuPharma received upfront payments totalling US$45 million, with a US$500 million cash milestone payment structure plus high royalties on future sales. In late 2011, following the acquisition of Cephalon by Teva Pharmaceuticals, ImmuPharma regained all product rights to the drug and owns 100% of the Lupuzor™ asset.

Lupuzor™ has a clear path into an established market with attractive economics when comparing GSK’s Benlysta drug which achieved sales of over $400m in 2015, with forecasts predicting annual sales to hit $1bn by 2020. Moreover, on the basis of Lupuzor™’s Phase IIb trial data, the drug demonstrated a higher response rate and fewer side-effects to Benlysta’s Phase III trial. As such, Lupuzor™ appears to be safer and more effective and is consequently likely to see higher market uptake if approved.

Lupuzor™ received Fast-Track designation from the US Food and Drug Administration (FDA), which expedites the drug’s approval process by shortening review periods. Lupuzor™ also received FDA approval to complete Phase III trial under Special Protocol Assessment (SPA) which effectively guarantees that the regulator will accept the trials’ results if they are positive.

Lupuzor™’s unique mechanism of action involves modulating the activation of auto-reactive T-cells. With little success to date, other attempts to modulate the immune response in SLE have been done further downstream in the immune cascade (see figure 1), most notably in the regulation of B-cells. However, in targeting upstream T-cell activation, Lupuzor™ presents a novel approach in modulating this unwelcome autoimmune reaction. This targeted approach marks a paradigm shift in treating autoimmune disease. Instead of shutting down otherwise healthy immune responses the T-cells are suppressed, leaving the immune system deleted from unwanted deleterious cells but intact as normal, beneficial immune cells are concerned. 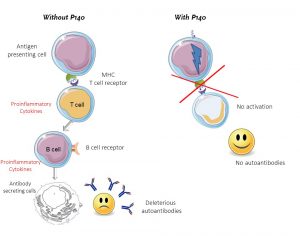 Significant evidence in support of LupuzorTM

Lupuzor™ has undergone substantial testing, including preclinical development, phase 1, phase 2a and phase 2b trials. Lupuzor™ performed well in the clinical Phase 2b trial, testing c. 200 patients (including all groups and placebo), where the drug demonstrated significant efficacy in the treatment of lupus. Most importantly, Lupuzor™ has demonstrated a clean safety profile throughout clinical trials to date.

For more information see the publication of Lupuzor’s double blind phase IIb results in the Annals of the Rheumatic Diseases of the Medical Journal.

ImmuPharma completed its first pivotal Phase 3 trial in Lupuzor™. The trial is registered on clinicaltrials.gov  as ‘A 52-Week, Randomized, Double-Blind, Parallel-Group, Placebo-Controlled Study to Evaluate the Efficacy and Safety of a 200-mcg Dose of IPP-201101 Plus Standard of Care in Patients With Systemic Lupus Erythematosus.’ The trial was run by Simbec-Orion, a Contract Research Organisation with expertise in Lupus trials. Top line results were announced in April & May 2017 click here

The Lupuzor™, open label study requested by clinicians and patients participating in the Phase III trial, announced results in June 2019. 62 patients were enrolled in the study throughout US and Europe completing a 24-week follow-up treatment period. The primary endpoint was successfully achieved confirming the safety profile of Lupuzor™ with no serious adverse events reported.  Insights provided by the study allow an optimised Lupuzor™ phase III design to progress.

With important insights gained from the first pivotal Phase III Lupuzor™ trial, a new Phase III clinical trial design has been identified. The ability to select the most responsive patients by biomarker profile has enabled Avion and ImmuPharma to agree the most robust way forward for Lupuzor™ in lupus patients. The Licence and Development Agreement allows completion of this new optimised international Phase III trial with Avion commercialising Lupuzor™ exclusively for the US. ImmuPharma retains all the rights to commercialise Lupuzor™, outside of the US, either through distribution partnerships or directly by ImmuPharma. Avion will also have the right to explore clinical development for other auto-immune indications within US territories.

ImmuPharma will receive milestone payments upon achievement of certain milestones, and tiered double-digit royalties on future revenues generated by Avion.